All but the 2007 conference have had a special medal struck, in several finishes. 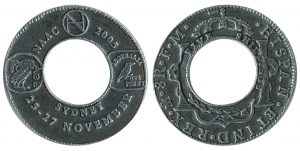 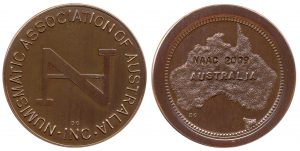 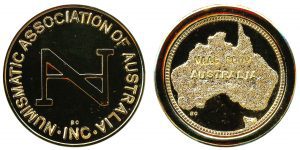 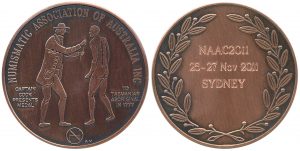 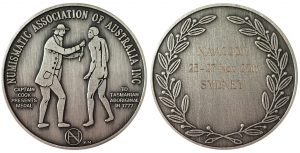 The obverse of the medallion depicts Captain Cook presenting a Resolution and Adventure medal to an aboriginal in Adventure Bay, Van Diemen’s Land on 29th January 1777, the first medal ever to be presented in Australia. The image has been taken from an unfinished watercolour of the event painted by Cook’s Third Voyage artist, John Webber.

The NAAC2013 Conference Medallion was devised to honour the late Graeme Stevens, a past president of the Australian Numismatic Society, Queensland Branch and founding member and past president of the Queensland Numismatic Society. Graeme, who suffered a rare medical condition, Eales Disease, was totally blind; the reverse of the medallion features the Conference title in Braille to reflect his disability and allow us to marvel at his numismatic achievements.

The Australian Numismatic Society Queensland Branch version was struck in aluminium and given out to the guests at the Saturday evening dinner (held at the Queensland Irish Association in Elizabeth St in Brisbane). 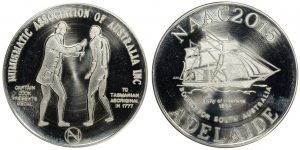 The reverse of the medallion depicts the Clipper Ship City of Adelaide in full sail bound for South Australia in 1864 (image from an 1864 lithograph). Built by William Pile, Hay & Co, the City of Adelaide was launched on 7 May 1864 as a Composite Clipper passenger ship to carry passengers and freight between Adelaide and the United Kingdom. Her maiden voyage was on 6 August 1864, and between 1864 and 1886 she made 23 round trips between Adelaide and London carrying passengers to South Australia and mainly cargo on the return trip. “Bound for South Australia” was the theme for the 2015 Conference. 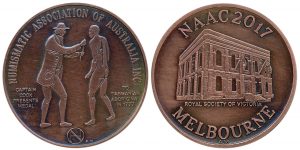 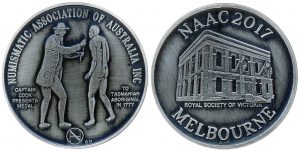 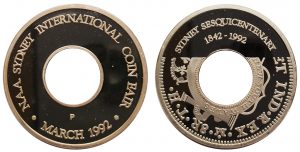 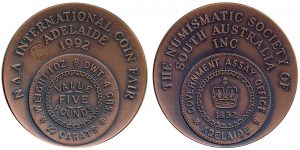