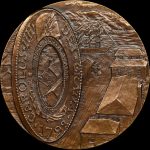 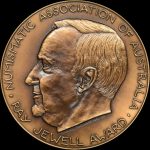 In 1998 the Association established the RAY JEWELL AWARD in honour of the founder and first President of the Association. The Award consists of two divisions, silver for outstanding contribution to Australian numismatics and the Numismatic Association of Australia; and bronze for the most outstanding article published in the Journal of The Numismatic Association of Australia over two consecutive volumes. The award consists of a silver medallion by Michael Meszaros, struck at the Paris Mint, which depicts a portrait of Paul Simon on the obverse, and an image of the Australian holey dollar on the reverse, together with a certificate.

The selection committee from time to time is chosen from the following list:

Silver Medal (outstanding contribution to Australian numismatics and the NAA)

Helen Walpole. Vol. 22, The role of sporting medals in a sports museum.