In addition, Frank is an active member of IBNS (Melbourne Chapter). He joined IBNS in 1990 and the Melbourne Chapter in 1991. Frank was the IBNS National Convention Manager from 2002 to 2004, and again from 2006, a position that he continues to hold.

Frank Robinson has contributed many articles to the NAV Journal, and various articles in CAB Magazine, Queensland Numismatic Journal and JNAA. There is no doubt that Frank is thoroughly deserving of this award, which was presented at the NAV meeting on Friday 17 January 2017. 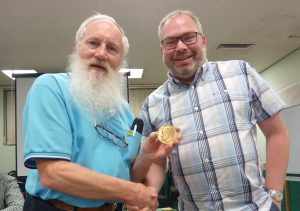